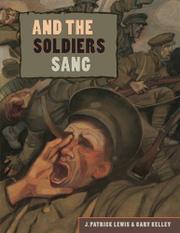 AND THE SOLDIERS SANG

Definitely for older children (and most likely to be appreciated by adults), this version of the true story of the Christmas Truce of 1914 is told through the eyes of a fictional young Welshman, with a terse yet lyrical text and stark, dramatic illustrations.

The unofficial cease-fire has inspired other picture books, including Christmas in the Trenches, based on the song by John McCutcheon. That version also used a fictional hero/narrator but allowed him to survive to tell the tale to his curious grandchildren. Lewis’ unnamed soldier is not so lucky. He describes the horrors of war eloquently and evokes the miracle of peace that reigned briefly for the holiday. The author piles on the poignancy, revealing the young man’s vain hope that the war would soon be over in a journal entry discovered after his death by sniper shot. He notes in a brief afterword that the war continued for just under four more years with a total loss of almost 10 million lives. Kelley’s compelling artwork features mostly dark shades and strong, angular compositions. The overall design includes panels of various sizes, allowing him to pack in plenty of events and emotions and providing a strong narrative flow.

Grim, upsetting and utterly beautiful, this is both a strong anti-war statement and a fascinating glimpse of a little-known historical event.