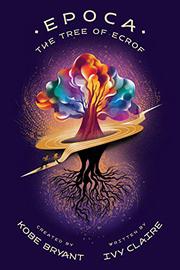 From the Epoca series, volume 1

Conceptualized by Academy Award–winning basketball player Kobe Bryant and written by author and athlete Claire, this amiable novel aims high in its worldbuilding.

And complicated it is, from the parentage of the 10-year-old protagonists on up. Princess Pretia Praxis-Onera is the tan-skinned, black-haired, green-eyed, and mixed-heritage daughter of the scandalously wed rulers of the kingdom of Epoca, and Rovi Myrios is the sun-tanned, orphaned street-urchin son of Pallas Myrios, a once-legendary, then disgraced-and-exiled Visualization Trainer. Pretia’s and Rovi’s lives intertwine when Epoca’s sacred scrolls state they are chosen to train at Ecrof Academy, the premiere training school for athletes. There, both attempt to come to terms with their familial and personal pasts as they learn to harness their granas, or divinely granted talents. The narrative constantly reminds readers that this book emulates the capital-A athlete, both via its harkening back to ancient Greece—witness the highly borrowed or derivative names of both places, like the Athletos Stadium and Mount Oly, and people such as Queen Helena and King Airos—and the item the main characters covet: a pair of golden sneakers called Grana Gleams. In and around all this, however, the creator and author spin an interesting, quickly paced tale.

In an era where athletes are worshipped like gods, this book’s creators are simply on-brand.