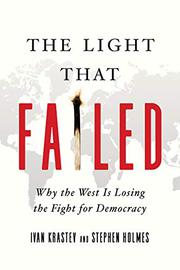 THE LIGHT THAT FAILED

Why the West Is Losing the Fight for Democracy

Two academics and policy experts bring considerable erudition to the conundrum of why anti-liberalism has gained currency since the fall of the Soviet Union, when the world seemed happy to see it go.

According to Krastev (After Europe, 2017, etc.), a fellow at the Institute for Human Sciences in Vienna, and Holmes (New York Univ. School of Law; The Quest for the Trinity: The Doctrine of God in Scripture, History and Modernity, 2012, etc.), once communism fell, the “radiant future” of Enlightenment democracy—encompassing a separation of powers, checks and balances, free elections, freedom of the press, and so on—seemed the sole alternative model. However, in chapters moving from Central and Eastern Europe through Russia and China, the authors show how imitating the "masters" created a groundswell of resentment and backlash. In Central Europe, Hungary and Poland were at first content to imitate the Western model. Unfortunately, “Central and East European versions of liberalism had been indelibly tainted by two decades of rising social inequality, pervasive corruption, and the morally arbitrary distribution of private property into the hands of a few.” Krastev and Holmes succinctly explain why this brand of populism and nativism would ring familiar in Russia, China, and eventually in the United States under Donald Trump. The authors also cogently explore the anti-immigration hysteria that has continued to plague these countries. In Russia, the authors see a convulsion of “aggressive isolationism” at work in addition to an effective destabilizing revenge theory bent on revealing the mask of hypocrisy of the U.S., especially in foreign affairs. Meanwhile, China, once an imitator of the Soviet Union, has ceased exporting its brand of Maoism and is reaping grandly the effects of centralized economic control.

An informative study that conveys a subtle but powerful argument for the attraction of anti-liberal populism.