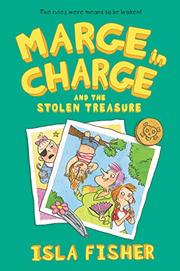 MARGE IN CHARGE AND THE STOLEN TREASURE

From the Marge in Charge series, volume 2

These three new chapters chronicling Marge’s babysitting antics (Marge in Charge, 2017) include a new baby, a trip to the swimming pool, and wedding mishaps.

Rainbow-haired Marge is a modern twist on Amelia Bedelia and Mary Poppins, creating genial havoc in the lives of her charges. Jemima and her little brother, “Jakeypants,” now joined by their destructive baby cousin, Zara, love the zany stories Marge tells them as she’s working. Whether it’s casting Zara as a pirate baby or convincing Jake to put on sunscreen, Jemima relates these adventures in a boppy, upbeat tone with liberal use of exclamation marks. Marge, who may (or may not) be a duchess, peppers the narrative with tales hinting at England’s colonialist past. While embedded in a seemingly all-white cast, Marge claims she “decided to sail to Africa…to explore faraway lands.” Later, a spot illustration shows her dressed in stereotypical Bedouin garb, reminiscing about the time she “galloped across the Arabian Desert…on a royal expedition.” Early on Jake jeeringly compares baby Zara’s “fat thighs” to a sumo wrestler’s, and the stories seem actively intent on avoiding any textual or emotional depth.

Readers who have graduated to chapter books may enjoy the imaginative adventures of the babysat, but caregivers may want to point them toward stories that are more meaningful or less cloying.