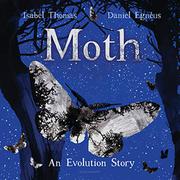 Thomas presents the peppered moth as an emblem of natural selection, tracking its adaptations during the Industrial Revolution and beyond.

A fascinating story with striking visuals.