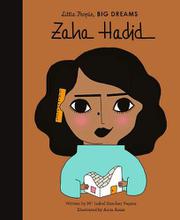 An introduction for young readers focuses on the architect’s journey and how she became the “Queen of Curve.”

Readers are introduced to “little Zaha,” a “Muslim girl who lived with her family in Baghdad,” and learn that at 7 she was designing clothes. Sánchez Vegara leads readers through Zaha’s childhood and adulthood, covering her schooling, favorite subjects, and how she became the woman who experimented and dared to change architecture. Amar’s illustrations are simple, bright, and colorful, portraying Zaha in a space mostly occupied by men. Little details such as the letters “ZH” on construction helmets worn by men listening to Zaha’s project plan emphasize her role as a leader. When Sánchez Vegara points out that Zaha “changed the way that people thought about women—especially an Arab woman—in an industry run by men,” Amar dedicates a spread that draws attention to Zaha’s status with a wall of portraits of notable architects in which she is the only woman. Like other titles in the series, this one ends with more facts on Zaha and her family along with four black-and-white photos taken at different points in her life and suggested titles for further reading. Series companion Mary Shelley, also by Sánchez Vegara but illustrated by Yelena Bryksenkova, publishes simultaneously.

A great introduction to an architect, a feminist, and a leader who showed the world the impossible. (Picture book/biography. 5-8)