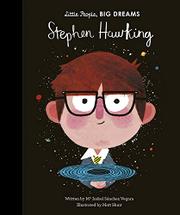 A first introduction to the greatest scientist of the past half-century.

Hawking makes a worthy but not an easy subject for an elementary-grade profile, as the likelihood that younger audiences aren’t really up on the ins and outs of quantum theory or gravitational singularities limits the author’s tally of his scientific contributions to a mention (sans meaningful context) of “Hawking radiation.” His other claim to fame, as an exemplar of the triumph of mind over physical disability, is far easier to grasp. For this, Hunt’s cartoon-style illustrations of a smiling scientist with idealized features on an oversized head help reinforce the notion that, as Hawking put it, “However difficult life may seem, there is always something that you can do and succeed at.” He leans on a cane before a wall of mathematical notations, takes his children for a spin on his wheelchair, and lectures to a rapt audience. The author (or an uncredited translator) uses some inept phrasing—a bald observation that eventually he “lost his voice and found a new one with a robotic drawl” can only leave readers confused, for instance. Illustrations of crowds place the white scientist among diverse gatherings. A closing note offers photos and a bit more detail plus a trio of titles for older readers.

A timely if unpolished entry in the Little People, BIG DREAMS series.