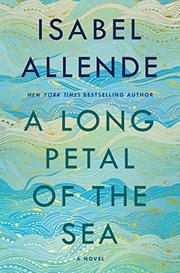 A LONG PETAL OF THE SEA

Two refugees from the Spanish Civil War cross the Atlantic Ocean to Chile and a half-century of political and personal upheavals.

We meet Victor Dalmau and Roser Bruguera in 1938 as it is becoming increasingly clear that the Republican cause they support is doomed. When they reunite in France as penniless refugees, Roser has survived a harrowing flight across the Pyrenees while heavily pregnant and given birth to the son of Victor’s brother Guillem, killed at the Battle of the Ebro. Victor, evacuated with the wounded he was tending in a makeshift hospital, learns of a ship outfitted by poet Pablo Neruda to take exiles to a new life in Chile, but he and Roser must marry in order to gain a berth. Allende (In the Midst of Winter, 2017, etc.) expertly sets up this forced intimacy between two very different people: Resolute, realistic Roser never looks back and doggedly pursues a musical career in Chile while Victor, despite being fast-tracked into medical school by socialist politician Salvador Allende (a relative of the author's), remains melancholy and nostalgic for his homeland. Their platonic affection deepens into physical love and lasting commitment in an episodic narrative that reaches a catastrophic climax with the 1973 coup overthrowing Chile’s democratically elected government. For Victor and Roser, this is a painful reminder of their losses in Spain and the start of new suffering. The wealthy, conservative del Solar family provides a counterpoint to the idealistic Dalmaus; snobbish, right-wing patriarch Isidro and his hysterically religious wife, Laura, verge on caricature, but Allende paints more nuanced portraits of eldest son Felipe, who smooths the refugees’ early days in Chile, and daughter Ofelia, whose brief affair with Victor has lasting consequences. Allende tends to describe emotions and events rather than delve into them, and she paints the historical backdrop in very broad strokes, but she is an engaging storyteller. A touching close in 1994 brings one more surprise and unexpected hope for the future to 80-year-old Victor.

A trifle facile, but this decades-spanning drama is readable and engrossing throughout.