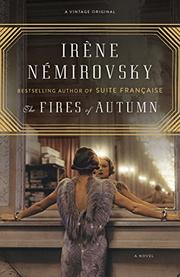 THE FIRES OF AUTUMN

Another in a string of reissues of the work of the French novelist who died in Auschwitz in 1942, prompted by the discovery of her incomplete but widely acclaimed Suite Francaise; written during the same period just before her death, this multigenerational novel spans war and peace.

It’s a tight fit. The short novel covers the period 1912-1941; Némirovsky always has one eye on the clock. She focuses on a small circle of bourgeois Parisians. Old timers and youngsters alike are fervent patriots. When war breaks out, one of them, Martial Brun, mans a first-aid post at the front; his early death is a shock, especially for his cousin and new bride, Thérèse. Their friend Bernard, dreaming of Napoleonic glory, volunteers at 18. Four years of war turn the twice-wounded Bernard bitter and cynical. Another friend, Raymond Détang, has become a war profiteer, one with a patriotic veneer. In the interwar period, the heart of the novel, Détang and his wife, Renée, become a formidable couple: He’s the consummate wheeler-dealer, and she’s the blithely adulterous society hostess. “They democratised vice and standardised corruption.” It’s disappointing that Némirovsky, with her impressively sharp eye and tart indictments, relegates them to the background. In the foreground are Bernard and the virtuous Thérèse. Bernard becomes Renée’s lover; when she discards him, he marries Thérèse. He’s also been involved in Détang’s shady armaments deals; for this he will receive savage authorial punishment. By now it’s 1939 (the clock is ticking), and Bernard’s boy, Yves, is old enough for the new war. The son, fiercely critical of his father and his money-grubbing cronies, will become a pilot and, if necessary, a sacrificial victim, while Bernard joins the ground war. The ending is rushed and tumultuous.

One of Némirovsky’s lesser works. All Our Worldly Goods (2011) covers the same period more successfully.