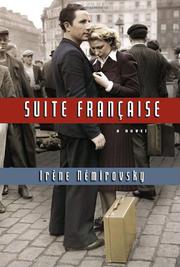 Acclaimed in France and the U.K., here are two sections of a hugely ambitious novel about World War II France, plus authorial notes and correspondence; the remaining three sections were never written, for the already established Russo-French-Jewish author died at Auschwitz in 1942.

These sections should be seen as movements in the symphony Némirovsky envisaged. Part one, Storm in June, follows various civilians fleeing a panicky Paris and a victorious German army in June 1940. Here are the Péricands, middle-class Catholics, secure in their car; Madame offers charity to refugees on foot, but strictly for show. There is Gabriel Corte, famous writer and “privileged creature” (so he thinks); Charles Langelet, the ice-cold aesthete who steals gasoline from innocents; Corbin, the obnoxious bank director who forces his employees, the Michauds, out of his car. They can handle that; they’re an admirable couple, sustained by their humility and mutual devotion. What interests Némirovsky is individual behavior in the harsh glare of national crisis; keeping the Germans in the background, she skewers the hypocrisy, pretension and self-involvement of the affluent Parisians. There is no chaos or cross-cutting between multiple characters in part two, Dolce. Here the focus is on one middle-class household in a village in the occupied zone in 1941. Madame Angellier agonizes over her son Gaston, a POW; her daughter-in-law Lucile, who never loved him (he kept a mistress), is less concerned; the women co-exist uncomfortably. Tensions rise when a young German lieutenant, Bruno, is billeted with them; he and Lucile are drawn to each other, though they do not become lovers. Then another complication: Lucile agrees to shelter a peasant who has shot a German officer. An honest soul, Lucile is forced into duplicity with Bruno; Némirovsky relishes these crisis-induced contradictions. Her nuanced account is as much concerned with class divisions among the villagers as the indignities of occupation; when the soldiers leave for the Russian front, the moment is surprisingly tender.

A valuable window into the past, and the human psyche. This is important work.