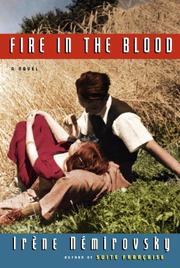 FIRE IN THE BLOOD

Following the discovery and publication of the French novelist’s Suite Française (2006), here’s another lost work: a short elegiac novel about the brief yet passionate loves and infidelities of youth.

The best guess is that Némirovsky (1903–1942) worked on this novel between 1938 and 1942, when she was deported to Auschwitz. The first-person narrator is Silvio, a middle-aged man living in Burgundy, an agriculturally rich region whose small landowners and farmers are suspicious and dour. As a young man, Silvio left this stifling community to sow his wild oats and work his way around the world, “propelled forward by the fire in my young blood”—echoes of Joseph Conrad’s Youth. Now, all passion spent, his inheritance squandered and his lands sold, he lives alone with only his dog for company. Nearby live his cousin Hélène and her husband François, a devoted couple, the picture of domestic tranquility. The marriage of their daughter Colette to Jean, a gentle young miller, sets the plot in motion. Early in their marriage, Colette takes a lover, experiencing like Silvio that “fire in the blood.” There is, however, a complication. The lover, Marc, already has a liaison with another woman, the unhappily married ward of Hélène’s half-sister. One night there is an “accident”; Jean is found dead in the river. It emerges that Jean had lost a struggle with another man; François, never dreaming his daughter had a lover, wants to involve the police. Eventually Colette’s parents learn the truth, which in turn forces Hélène to make a stunning confession of her own about her young, passionate self, and induces in Silvio the great mournful cry, “I want my youth back.” There is one puzzling omission at the end which suggests Némirovsky, a careful plotter, had loose ends to tie up.

Neither a masterpiece nor a curiosity but an elegant expression of universal longings rooted in a specific milieu, provincial France, that’s observed with a caustic brilliance.