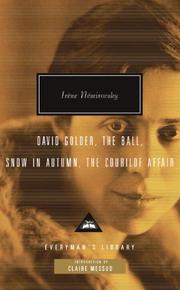 DAVID GOLDER, THE BALL, SNOW IN AUTUMN, THE COURILOF AFFAIR

Four works of fiction, three available in English for the first time, by the Russo-French author and Auschwitz victim whose fame was resurrected with the long-lost Suite Française (2006).

The appealing Snow in Autumn, a poignant portrait of often unappreciated devotion in a topsy-turvy world, concerns Tatiana, an old nanny who has worked for rich Russian landowners her entire life. The revolution forces the family to flee; Tatiana follows them to Paris, for they are her people; her dead husband and child barely rate a mention. Less appealing is The Ball, which concerns the plan of an unpleasant, nouveau-riche Parisian couple to launch themselves into society through a ball. Their scheme is foiled by their mistreated 14-year-old daughter, who destroys the invitations, but the destruction is rather contrived. David Golder is the novella that made Némirovsky famous. The eponymous Golder is an old, wealthy oil speculator, an odious Russian Jew transplanted to Paris. After rejecting his longtime partner’s plea for help and driving him to suicide, he joins his family, loathsome parasites, in Biarritz. The story pulses with a passionate misanthropy, tinged with anti-Semitism (an assimilated Jew, Némirovsky eventually converted to Catholicism). It’s crude, yes, but forceful and memorable. Finally there is The Courilof Affair. Of particular interest in our terror-sensitive times, it’s the memoir of a former revolutionary terrorist, now disenchanted. Logna, the son of Russian terrorists, is raised in Switzerland. In 1903, the young man is sent to St. Petersburg to assassinate Courilof, the brutal Minister of Education. Logna infiltrates the household by posing as a doctor (Courilof has liver cancer). In a variation on the Stockholm Syndrome, the terrorist softens towards his enemy, for the Minister has endearing qualities. Replete with ironies, this is the standout work.

While not all the pieces are of equal quality, the collection as a whole is further proof that its daring, protean author’s wretched death was indeed a loss to literature.