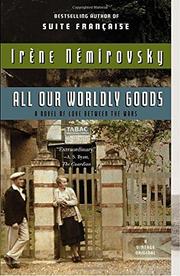 ALL OUR WORLDLY GOODS

More buried treasure from the French author killed at Auschwitz in 1942 and re-discovered in 2006; this story of a middle-class family roiled by love and war was posthumously published in 1947.

Saint-Elme in Normandy is a company town that revolves around a paper factory owned by the Hardelots. Their patriarch in the early 20th century is Julien, a domestic tyrant who has arranged the marriage of his grandson Pierre to the wealthy orphan Simone. Stability and propriety—these are his watchwords. But he has misjudged the spirited Pierre, in love with the equally spirited but less socially elevated Agnès, also being married off. The pleasure here comes from Némirovsky’s dissection of the haute bourgeoisie: she knows these people, their secret selves. Gossip spreads about the lovers’ innocent goodbyes in the woods. A scandal! Both engagements are broken off. Julien disowns his grandson; Pierre marries Agnès in Paris, a haven from the stifling conventions of Saint-Elme. Némirovsky excels at mordant characterizations, but her depiction of devoted couples is equally convincing, and these young people, romantic realists, make a marriage strong enough to survive a chaotic future; it anchors the novel. That chaos arrives with World War I. Roads are choked with refugees. Saint-Elme and its factory are destroyed, but Julien rebuilds and reconciles with Pierre, for the boy has fought a good war. The inter-war years see Pierre’s discarded fiancée Simone emerge as a power at the factory (capital counts), though her own marriage is difficult. Her rebellious daughter will fall for Pierre’s son Guy, another potential scandal. All too soon war returns, Saint-Elme and the factory are destroyed again, but Pierre and Agnès rise to the occasion. The novel has its flaws. Some characters are undeveloped; the final section is rushed. Yet they are more than outweighed by the author’s almost Tolstoyan sweep, and her vision of a society refracted through one family under siege. For English-language readers, the best introduction to Némirovsky’s work.