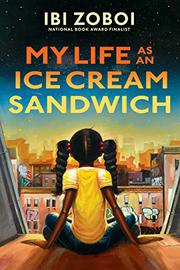 MY LIFE AS AN ICE CREAM SANDWICH

When trouble hits her family like an asteroid, Ebony-Grace, aka Cadet E-Grace Starfleet, is forced to leave her beloved grandfather and her hometown of Huntsville, Alabama, to spend a week with her father in Harlem, New York—or as she calls it, “No Joke City.” Determined to ignore what she calls the “Sonic Boom,” New York’s hip-hop revolution in the early 1980s, Ebony-Grace rejects the people, music, and movements of Harlem, instead blasting off in her mind aboard the Mothership Uhura to save her grandfather, Capt. Fleet. Stuck, Ebony-Grace works to navigate a new frontier where she is teased and called “crazy” because of her imaginative intergalactic adventures. Ostracized as a flava-less, “plain ol’ ice cream sandwich! Chocolate on the outside, vanilla on the inside,” Ebony-Grace tries her best to be “regular and normal,” but her outer-space imaginings are the only things that keep her grounded. The design includes images that sho nuff bring the ’80s alive: comic-strip panels, inverted Star Wars scripting, and onomatopoeic graffiti-esque words. Unfortunately, these serve to interrupt an already-crowded narrative as readers hyperjump between Ebony-Grace’s imagination and the movement of life in the real world, transmitted via news reports and subway memorials.

This middle-grade read is heartfelt, but nostalgia that’s a bit too on the nose makes it hard to follow