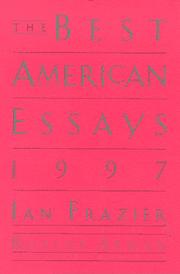 The latest sampling of choice nonfiction from America's literary journals and magazines, in a series that is a perennial success. In his introduction, this year's editor, humorist Frazier (Acme v. Coyote, 1996, etc.), describes the essay as a piece that happens when a writer quits longing for form and just writes ``for no better reason than the fun and release of saying.'' And because the genre ``provides a way to tell the narratives and speculate on them at the same time,'' he suggests, it has a particular appeal for an age quite self-absorbed and anxious to puzzle out where it is going. There are some familiar practitioners of the form here, including Susan Sontag, Cynthia Ozick, and Gay Talese. Other veteran writers, such as poet Charles Simic and novelists Richard Ford and Thomas McGuane, are less well known as essayists, though equally strong. And some less familiar writers contribute startling work. Among the standouts is Jo Ann Beard's tour-de-force ``The Fourth State of Matter,'' which describes in fascinating detail the events leading up to tragedy when a disillusioned physics doctoral candidate named Gang Lu shot up the offices of the Iowa City scientific journal where Beard was the managing editor, killing several people; and Paul Sheehan's ``My Habit,'' on his crack-vial collection, which retains its allure even without the cool photographs of his unusual archive that accompanied the essay's original publication in the New Yorker. Boston-based psychologist Lauren Slater's ``Black Swans,'' in which she describes her battles with obsessive-compulsive disorder, has a painful vibrancy. Vietnamese-American Là Thi Diem Th£y's ``The Gangster We Are All Looking For'' is a wrenching exploration of immigrant life in California. Discrete but complementary entertainments in a range of keys that continue to define what is surely one of our most robust literary forms.