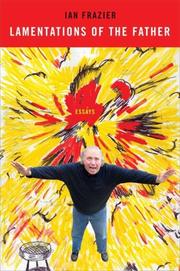 LAMENTATIONS OF THE FATHER

Another hilarious collection from essayist/humorist Frazier (Gone to New York: Adventures in the City, 2005, etc.).

A longtime New Yorker—and prolific contributor to the magazine of the same name—Frazier has previously mined the city for comic gold to share stories about his encounters with strangers and interactions with his wife and children, all filtered through his self-deprecating voice. He now lives in New Jersey, where his dry humor is used to great effect, whether he’s recounting his duty as household dishwasher or noting details about the FBI poster for Osama bin Laden at the post office. This book takes its title from Frazier’s 1997 essay included in the Atlantic Monthly’s 150th anniversary collection of best writing. Other pieces are based on recognizable current events and pop-culture icons, such as “My Wife Liz,” full of details about the author’s fictional marriage to Elizabeth Taylor: “Some people say that there should be certain minimum standards you have to meet in order to qualify as an ex-husband of Elizabeth Taylor’s, and that I (and a few other guys) don’t make the grade. Utter garbage!” Most of the 30-odd pieces are only a few pages long, offering up perfect snapshots of absurdities and imagined vignettes. The narrator of “Caught”—the coyote who was trapped for two days in Central Park in 2006—takes a Holden Caulfield approach to his new-found recognition: “If you’re really interested in hearing all this, you probably first want to know where I was whelped, and what my parents’ dumb burrow was like, and how they started me out hunting field mice, and all the Call of the Wild kind of crap, but I’d really rather not go into it, if that’s all right with you.” Frazier is a masterful comedian whose seeming lack of overconfidence not only endears him to readers but also invites identification, particularly in humiliating situations. His sense of humor is so uncanny and surprising it’s nearly impossible not to be charmed.