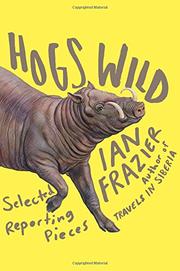 The veteran humorist and reporter for the New Yorker presents a collection of pieces that record his pursuits of wild hogs, hermit crabs, Asian carp, a Styrofoam substitute, and numerous other quarry.

Most of these pieces date from the previous decade and are arranged in an order that reflects not so much chronology as rhythm (shorter ones are sprinkled in among the longer), though some do relate more or less thematically to those surrounding. A piece on beach art, for example, precedes one on Hurricane Sandy’s assault on the beaches and inland territory of Staten Island. Frazier (The Cursing Mommy’s Book of Days, 2012, etc.), who recently wrote about his journeys in a famously remote land (Travels in Siberia, 2010), ranges here over terrain more familiar to him—Manhattan and environs—although he does venture elsewhere, including Arizona and the Netherlands. In pieces previously published (and now slightly revised) in the New Yorker and other publications, the author gives readers a clear look at his research methods, fearlessness, vast curiosity, clear style, and unusual ability to get away with telling us things that would sound boring and unnecessary from a lesser writer—for instance, the routes and modes of transportation he took to arrive at relevant sites. His approach will remind readers of his great New Yorker colleague John McPhee: he seeks out the quirky and interesting people involved in his story (e.g., others who, like him, were seeking the place in Death Valley where Charles Manson was captured), gives us rich background derived from his deep reading of his subject (like an antidote to heroin overdoses), offers interviews with the principals in his cases (the family in New Jersey who thought a meteorite had punctured their bathroom ceiling), and so on. His celebrated humor glows rather than erupts in these more expository pieces.