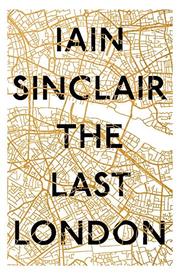 True Fictions from an Unreal City

An unconventional, atmospheric exploration of London from one of its most unique chroniclers.

At first, some readers may experience confusion about the latest from Sinclair (American Smoke: Journeys to the End of the Light, 2014, etc.), trying to discern if this book is just a stream-of-consciousness trip. Not to worry, however, as the narrative is a bright collection of the author’s walks over the years, and they’re all enlightening. This is a book by a man who knows London seemingly inch by inch; he walks everywhere and takes in the environment and the people—e.g., the “Vegetative Buddha” on a bench in “modest London Park” or “Mole Man of Hackney,” who has spent decades burrowing beneath his house. Sinclair also notes the many people consistently wedded to their digital devices, oblivious to what is going on around them. They’re all part of London, and they all make the city what it is. So, too, does the detritus the author carefully observes: the general trash, polystyrene cups, chip packets, chewing gum, etc. The massive Shangri-La Hotel, aka the “Shard,” which features the highest pool in Europe, “is as an implanted flaw in the eye. It moves as we move, available to dominate every London entry point, to endstop every vista.” Sinclair has particular vitriol for the “peloton,” which he calls the groups of bicyclers taking over the footpaths ever since the bicycling initiative broke in as a transport solution. The author’s walks also encompass the underground and even elements of the countryside. In each, Sinclair picks up snippets of conversations, usually unconnected and unrelated except by geography. Readers interested in the history of London will greatly enjoy tracing the author’s walks, and even those who think they know everything about London may be pleasantly surprised.

This is no ordinary memoir, but we wouldn’t expect such from one of England’s most inventive psychogeographic writers. Patience will reward each reader in his or her own way.