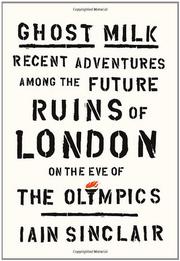 The nimble London-based author offers a loose-limbed set of disgruntled observations on the massively disruptive development that became the 2012 Olympic Village.

A resident of Hackney, in the area of London that has been destined for transformation by the Summer Olympics, Sinclair (Hackney, That Rose-Red Empire: A Confidential Report, 2009, etc.) has watched the development over the past few years with consternation and alarm. The heart of the area is Stratford, once a shambling, marshy mess of loading docks called Chobham Farm, where the author, then a fledgling poet and college graduate, worked as a day laborer in 1971. His first essays form a poignant reflection on this now-lost world of scrappy young transients eking out a hand-to-mouth existence unloading sea containers and loading lorries. Subsequently, the area was seized by what Sinclair believes was a nefarious “intimate liaison” between government and development, in a manner he compares both to the German model and to the Chinese system (in one chapter, a Chinese poet now living in London reflects on the similar “destruction of history” he witnessed in Beijing in preparation for the 2008 games). In “Ghost Milk,” the author examines the disturbance of long-settled industrial waste on the multi-acre site, which provoked an ecological disaster. Sinclair is a veteran trekker among the urban wasteland. Inspired by Peter Ackroyd’s 2007 film Thames: Sacred River, as well as by the work of J.G. Ballard, he took off by foot for a river walk to Oxford; more ambitiously, he traveled to the former Olympic sites in Berlin and Athens and to the Ballard holdings at the Harry Ransom Center in Austin, Texas. American readers will be alternately delighted and disoriented by Sinclair’s spastic, giddy literary circumambulations.