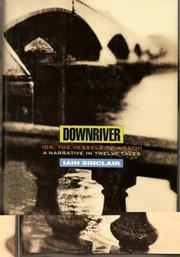 DOWNRIVER, (or, THE VESSELS OF WRATH)

A Narrative in Twelve Tales

Winner of the 1992 Encore Award in Britain, Welsh-born poet and antiquarian-bookseller Sinclair's second novel (but first US publication): a tumultuous, frenzied, and mercilessly critical story of London past and present. Constructed as a series of interlocking stories, the primary focus is on the Docklands, a rundown wharf and warehouse district that was targeted for upscale redevelopment in the boomtime of the early-80's, but that the subsequent recession has reduced to an unfinished folly. The author as narrator, along with a handful of eccentric companions, accepts the task of uncovering whatever items of historical interest might exist about it, ostensibly for a documentary film, exploring the area by rail and by river in search of clues that will unlock its secrets. The 19th-century tales of a champion aboriginal cricketer, King Cole, who came from Australia to clobber his English opponents only to succumb to the London air shortly thereafter, and of a disastrous collision on the Thames that left hundreds of holiday pleasure-seekers dead are among many historical motifs woven into the saga, with futuristic scenarios of satanic rites enacted on the Isle of Dogs by papal and corporate conspirators being equally vivid. The depth of erudition and full- scale incorporation of book-, film-, and folklore are certainly impressive, but a troubling lack of cohesion in such diverse, unfettered flights of fancy is ultimately admitted by the narrator himself, who finally turns the story over to his fellow traveler rather than attempt to tie it together himself. Lavishly phrased to a point of self-indulgence, restless, and wild: less a novel than a frenetic tour of a city and culture that, unfortunately, leaves one coolly appreciative at best.