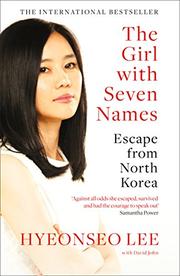 THE GIRL WITH SEVEN NAMES

by Hyeonseo Lee with David John

The ably reconstructed story of the author’s convoluted escape from North Korea, detailing the hardships of life there and the serendipity of flight.

A supremely determined young woman, Lee chronicles her life in North Korea and her defection in her late teens in 1998. With the assistance of co-author John, she re-creates a picaresque tale of incredible, suspenseful, and truly death-defying adventures, which eventually led her to asylum in South Korea and then America. The author grew up largely in the northeast province of Ryanggang, bordering the Yalu River with China, and her family home was in Hyesan. Her father was a privileged member of the military, and her enterprising mother was a successful trader on the black market. The family, including younger brother Min-ho, did not endure the hardships of famine like people of low songbun, or caste, but the author learned that her father was not her biological father only shortly before he died by suicide after being trailed by security, beaten, and imprisoned in her mid-teens. Her mother had previously married and divorced another man. At age 17, the lights of China, directly across the river, beckoned, and the author managed to cross and establish contact first with a trading partner of her mother’s, then dissident relatives of her father’s in Shenyang. While the author had no intention of leaving her mother, it was apparent that it was too dangerous for her to return. Her relatives shielded her for a few years, trying to arrange a marriage with a wealthy Korean-Chinese man, from whom the author fled at the eleventh hour. Working as a waitress in Shanghai afforded some invisibility, though she was always susceptible to con men and security police. As the narrative progresses, the author’s trials grow ever more astounding, especially as she eventually tried to get her mother and brother out of North Korea.