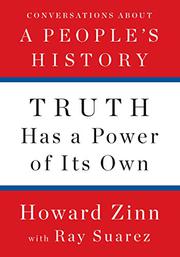 TRUTH HAS A POWER OF ITS OWN

Conversations About a People’s History

by Howard Zinn with Ray Suarez

A transcription of a long 2007 conversation between Zinn (1922-2010) and then–PBS NewsHour national correspondent Suarez (Latino Americans: The 500-Year Legacy That Shaped a Nation, 2013, etc.), now co-host of World Affairs.

Their conversation is free-wheeling and illuminating, though readers of Zinn’s A People’s History of the United States (1980) will be familiar with his overriding emphasis on what has not been taught in U.S. history textbooks—namely, the ethnic cleansing of Native Americans and the undercurrents of class conflict between the haves and have-nots. This work is divided into three parts that correspond roughly with the American timeline: “Change the Story,” or the gritty, shameful history of the country’s founding by genocide, slavery, and an ingrained class struggle that Zinn claims was “the backdrop to the framing of the Constitution in 1787”; “They Rebelled,” chronicling the movements of popular dissent and protest that arose especially in the 19th century (e.g., the Lowell Mill strikes, the abolition movement, and agrarian radicalism); and “They Began to Organize,” which follows movements that grew in response to inequities, such as the Bonus March of veterans; the grassroots farmers movement; the civil rights, women’s, and Indian movements; and the struggles of the LGBTQ community. Zinn is keen to underscore the asymmetry of power and economics and how the poor and powerless often turn against each other rather than their oppressors. He is constantly turning a subject over to look at it a different way, such as the causes of war and “the job of selling the war to the American people.” Throughout, Suarez proves to be a capable interviewer, asking solid, specific questions and demonstrating his handle of the many subjects discussed.

A readable and nondogmatic book that will appeal to young people especially as a way to rethink conventional history.