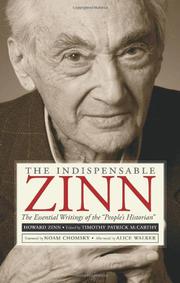 The Essential Writings of the "People's Historian"

If you know anything about Dunmore’s War or the Ludlow Massacre and are not a professional historian, the chances are good that you read about it in the pages of Zinn’s A People’s History of the United States. If you know anything about Zinn himself, it is largely because he was a relentlessly dedicated activist, somewhat less public than the likeminded Noam Chomsky but in no way as cloistered as the average academician. He was never shy about a good scrap. Indeed, writes volume editor McCarthy (History and Literature/Harvard Univ.; co-editor: Protest Nation: Words That Inspired A Century of American Radicalism, 2010, etc.), “Howard’s troublemaking—pedagogically, intellectually, politically—is now the stuff of legend, in large part because he was so consistently willing to speak truth to power throughout his life, no matter the stakes.” True enough: He was fired from one appointment, unheard of for academics outside of cases of fraud or moral turpitude, though he went on to enjoy a quarter-century of tenure at Boston University. McCarthy gathers material not just from the well-known People’s History, but also from less easily available publications from the civil rights and antiwar eras. In one, Zinn addresses the question “what is radical history?” The answer is invigorating, speaking to a kind of public history that allows us to “intensify, expand, sharpen our perception of how bad things are, for the victims of the world.” That anticipates some of the “Occupy History” concerns of recent months by several decades, but it is also distinctly collegial; Zinn even gives a tip of the hat to Henry Kissinger, declaring, “Kissinger has always been one of my favorites.”

“We need to expand the prevailing definition of patriotism beyond that narrow nationalism that has caused so much death and suffering,” writes Zinn. For sympathetic readers, this makes an ideal primer for that cause.