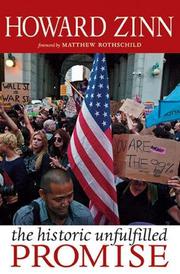 A collection of essays by American Left icon Zinn (The Bomb, 2010, etc.) originally published in the political journal The Progressive.

“What kind of country do we want to live in?” asks the author in these essays dating mostly from the last years of his life, and thus following the historic arc from 9/11 to the wars in Iraq and Afghanistan to the election of Obama. As always, he responds to this question with a radical’s zeal, a historian’s insights and an activist’s optimism. War is on his mind. As the “war on terror” commenced, he railed against what he perceived to be the assault on American liberties this war had allowed. As the invasion of Iraq loomed, he warned against the countless lives that would be lost or ruined. As victory was declared in Iraq, Zinn was there to point out the horror of destroyed innocent lives and the chaos left behind. But the larger issue was war itself: “The abolition of war has become not only desirable but absolutely necessary if the planet is to be saved. It is an idea whose time has come.” On the whole, this is not Zinn at his best, as these are, after all, polemical articles meant perhaps more to arouse the converted rather than enlighten the uninitiated. There is also a certain degree of repetition of themes and phrases, as will happen with any collection of articles not originally meant to be read together. Certainly, many readers will not appreciate his message, but the spirit and passion of the messenger, an American original, cannot be denied.

A useful introduction to one of America’s great scholar-activists.