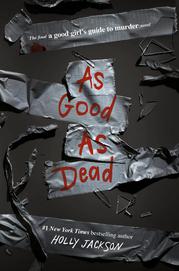 AS GOOD AS DEAD

From the Good Girl's Guide to Murder series, volume 3

Everything comes full circle in this trilogy closer.

It’s not easy being Pippa Fitz-Amobi: Max Hastings, a teen rapist who was found not guilty, is suing her for defamation. She blames herself for the death of local journalist Stanley Forbes, who was revealed to be the child of a serial killer, but she also feels a kinship with his killer, Charlie Green, who is on the run. To cope with her PTSD, Pip takes Xanax purchased from drug dealer Luke Eaton, who indirectly supplied the late Andie Bell, the subject of her first case. Pip is used to online threats, but one message has been appearing again and again: “Who will look for you when you’re the one who disappears?” Someone is leaving dead pigeons in Pip’s front yard and mysterious chalk figures in her driveway, but Detective Hawkins doesn’t believe there’s a pattern and refuses to investigate. Research into her own stalker leads to an imprisoned serial killer who supposedly confessed, but the connections are striking, and Pip fears the police may have the wrong man. This volume centers on a psychologically traumatized Pip, whose actions inhabit morally gray areas till the very end. Her romance with Ravi Singh is a much-needed balm, but their love is tragically tested. A particular strength is the way elements in this novel connect with clues from earlier entries. Pip’s mother is cued as White and her father, as Black; Ravi is of Indian descent.