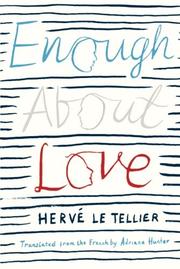 The first complication d’amour involves Thomas Le Gall, a psychiatrist in Paris. He waits for Anna Stein, one of his patients for 12 years and now finally getting ready to end her therapy. Toward the end of this session, she impulsively blurts out that she’s recently met Yves Janvier, a writer whom she finds intriguing. Le Gall duly notes this information and then a few hours later is struck by an erotic thunderbolt of his own in the form of Louise Blum, a lawyer whom he meets at a party and who could be Anna’s “blond twin.” Louise is married to a prominent scientist, Romain Vidal, whom she’s beginning to find lackluster and boring, while Anna is married to Stan, a prominent ophthalmologist. And while both family situations are complicated by children, amatory instincts begin to overtake the better judgment of the adults. Anna and Yves begin an affair, as do Thomas and Louise. French author Le Tellier occasionally and cleverly crosses the threads of his dual plot—e.g., by having Anna and Louise meet each other accidentally while shopping for clothes. And of course Anna makes her developing relationship with Yves (and deteriorating relationship with Romain) part of her confessional sessions with Le Gall. Tellingly, at one point she says, “ 'if I stay with Yves, I’ll have the life I’m dreaming of,’ ” which Le Gall repeats as, “ 'The life you’re dreaming of. You’re dreaming.’ ” Yves writes a short book based on his liaison with Anna Stein (Forty Memories of Anna Stein), which Le Tellier incorporates as part of his novel. Meanwhile, Romain sets up an appointment with Le Gall under an assumed name and uses this occasion to let the psychiatrist know that Romain is not in the dark about the affair Le Gall is engaged in with his wife.

Le Tellier examines the possibilities of love after 40, and he deals with this issue with patience, understanding and bemusement.