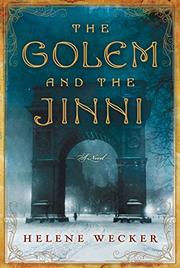 THE GOLEM AND THE JINNI

Can’t we all just get along? Perhaps yes, if we’re supernatural beings from one side or another of the Jewish-Arab divide.

In her debut novel, Wecker begins with a juicy premise: At the dawn of the 20th century, the shtetls of Europe and half of “Greater Syria” are emptying out, their residents bound for New York or Chicago or Detroit. One aspirant, “a Prussian Jew from Konin, a bustling town to the south of Danzig,” is an unpleasant sort, a bit of a bully, arrogant, unattractive, but with enough loose gelt in his pocket to commission a rabbi-without-a-portfolio to build him an idol with feet of clay—and everything else of clay, too. The rabbi, Shaalman, warns that the ensuing golem—in Wecker’s tale, The Golem—is meant to be a slave and “not for the pleasures of a bed,” but he creates her anyway. She lands in Manhattan with less destructive force than Godzilla hit Tokyo, but even so, she cuts a strange figure. So does Ahmad, another slave bottled up—literally—and shipped across the water to a New York slum called Little Syria, where a lucky Lebanese tinsmith named Boutros Arbeely rubs a magic flask in just the right way and—shazam!—the jinni (genie) appears. Ahmad is generally ticked off by events, while The Golem is burdened with the “instinct to be of use.” Naturally, their paths cross, the most unnatural of the unnaturalized citizens of Lower Manhattan—and great adventures ensue, for Shaalman is in the wings, as is a shadowy character who means no good when he catches wind of the supernatural powers to be harnessed. Wecker takes the premise and runs with it, and though her story runs on too long for what is in essence a fairy tale, she writes skillfully, nicely evoking the layers of alienness that fall upon strangers in a strange land.

Two lessons: Don’t discount a woman just because she’s made of clay, and consider your wishes carefully should you find that magic lamp.