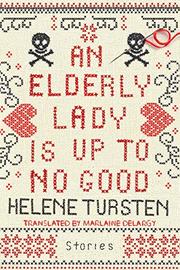 AN ELDERLY LADY IS UP TO NO GOOD

Maud has a good thing going. At age 88, she’s lived in a large apartment rent-free for 70 years because of a clause in an old contract. Never married, she loves to travel alone and to be alone. In the first story, "An Elderly Lady Has Accommodation Problems," a rare event happens: Her doorbell rings. Jasmin Schimmerhof, a 40-year-old avant-garde artist who lives in the building, stops by to say hello. The daughter of celebrities, her past includes drugs, multiple divorces, and tragedy. Her current art project strives to “unmask the domineering tactics of the patriarchy,” meaning that her small apartment is filled with phalluses—some even hanging from the ceiling. She is delightfully overbearing as she constantly tries to weasel her way into Maud’s good graces. But Maud isn’t stupid or senile, and she knows Jasmin is up to something. Once Maud figures out what it is, her solution is drastic, funny, and final. Maud is a seasoned world traveler who once, at age 18, had been engaged to Lt. Gustaf Adelsiöö. He’d emphatically broken off their engagement on learning her family wasn’t rich. Now, in “An Elderly Lady on Her Travels,” she reads in the newspaper that he is a wealthy 90-year-old widower about to marry the 55-year-old Zazza, whom ex-teacher Maud knows as her long-ago student, a schemer and a failed soft-core porn actress. When Maud arranges to get near her at a spa and then overhears Zazza’s plans to take control of Gustaf’s estate, Maud devises an emphatic countermeasure. And then in “An Elderly Lady Seeks Peace at Christmastime,” she deals with “The Problem” in the apartment above her. Maud’s murders always have plausible motives, and she is a sympathetic character as long as one keeps a safe distance. Each story takes its sweet time to develop and concludes with a juicy dose of senior justice.

The book is pure fun, although slender. Another volume of Maud’s misdeeds would be most welcome.