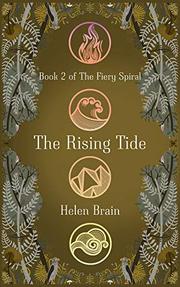 From the Fiery Spiral series, volume 2

A teen girl navigates a world that is new to her—and that she is tasked to save.

Sixteen-year-old Ebba is now an official Citizen of Table Island and one of the richest people there, more powerful than she ever could have imagined. Many are eager to take advantage of her naïveté. Her biggest challenges are figuring out how to leverage her wealth and power and make her farm more profitable in order to provide for more people than she anticipated—all while trying to find the four missing amulets that will prevent the coming of the second Calamity. But all Ebba really wants is to be happy and carefree with her first love, Micah, and the friends she grew up with. Plagued by secrets and a new source of insecurity in the form of a perceived rival in love, it’s uncertain whether Ebba will figure out to whom she can turn to help save herself and those she cares about. Set in a fantasy version of South Africa and featuring a multiethnic cast, Brain’s follow-up to The Thousand Steps (2019) is a weaker effort than its predecessor: Ebba is an underdeveloped protagonist whose recklessly impulsive and indecisive behavior may frustrate readers. Clunky transitions made it difficult to invest in the story, resulting in confusing, anticlimactic scenes.

A tepid sequel filled with angst, power grabs, and politics.