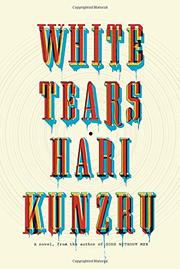 Seth, who narrates most of Kunzru’s fifth novel (Gods Without Men, 2012, etc.), is obsessed with sound, making field recordings of his travels around Manhattan. Carter, his old college buddy and scion of a wealthy family, is similarly obsessed with old blues 78s. Together, they’re an up-and-coming production team that works with white rappers and rock bands looking to make their music sound antique and “authentic.” They’re so good at it that, as a prank, they take Seth’s recording of a Washington Square denizen singing a mordant blues song, use modern tools to faux age it, attribute it to the made-up name Charlie Shaw, and upload it, whereupon online vintage-blues fans go bonkers. Kunzru signals early on that Seth and Carter are playing with fire, from Seth’s hubristic suggestion that his blues knowledge is a passkey to blackness to Carter’s exclusionary and officious family, which made its fortune in private prisons. But Kunzru attacks the racism the two represent indirectly and with some interesting rhetorical twists. Carter is mysteriously beaten into a coma in the Bronx, and once Seth begins an investigation with another collector and Carter’s sister, the narrative begins to deliberately decouple from logic—suggesting, for instance, that a real Charlie Shaw recorded the fake song Seth and Carter created. This weirdness reads subtly at first—a record skipping a groove, a playback glitch—but in time commands the narrative, allowing Kunzru to set the deadly mistreatment of blacks in the Jim Crow South against the hipster presumptions of whites now. Kunzru has done his homework on racial history and white privilege, but the novel is also lifted on his sharp descriptions of music, which he makes so concrete and delectable you understand why his misguided, ill-fated heroes fall so hard for it.

A well-turned and innovative tale that cannily connects old-time blues and modern-day minstrelsy.