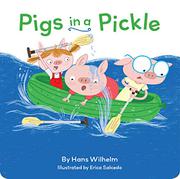 PIGS IN A PICKLE

Three pigs find themselves trying but not always succeeding in this story of perseverance.

They fall out of boats, spin out of control, and often fall down, but in the end, these “pigs in a pickle know what to do. / They try again—they carry through!” In a tale that combines aspects of “This Little Piggy” and “Humpty Dumpty,” Wilhelm’s rhyming text echoes the childhood classics. Impressively, the story conveys its message about perseverance without ending sappily with a success story. In Wilhelm’s take, when you give it your “best shot,” realistically, “sometimes it works… / …and sometimes it does not.” The piggy who falls off the merry-go-round gets back up and tries again—and again he falls off. What a lesson for little readers! Salcedo’s three pigs each have their own distinctive look: one with large glasses, the second with pigtails, and the third with a round tummy. Each illustration is filled with a lot of movement thanks to well-placed lines, swirls, and squiggles, a necessary inclusion given the copious stumbling, twirling, and falling. There is also a lovely level of detail, from the suits on the playing cards to the tiny hose and ladder on the toy fire truck, though this visual complexity gears this book to the older segment of the board-book audience.

This story’s got a moral that’s actually true to life.