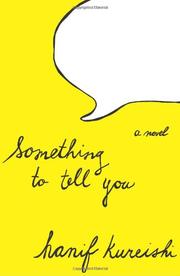 SOMETHING TO TELL YOU

A middle-aged psychoanalyst takes stock of his overcrowded past and reluctantly confronts his many demons, in the latest from Kureishi.

Jamal Khan, whose fondest memories hearken back to swinging, newly multicultural London in the 1980s (the period observed in Kureishi’s first novel, The Buddha of Suburbia, 1990), when he partied incessantly and knew everybody, is now reaping the bitter harvest of his excesses. Estranged from his wife Josephine, despised by his curmudgeonly 12-year-old son, depressed by guilty memories of the former love of his life Ajita (and by a guilty secret involving her late father), Jamal weighs the problems and sorrows of his importunate patients against the unraveling of his own exhausted psyche—meanwhile plunging into further miscalculations and twisted relationships. The most challenging of the latter involve women: notably, his perpetually deranged sister Miriam, hell-bent on a relationship with their father’s friend Henry, a formerly eminent theater director; and Henry’s daughter Lisa, a strident social worker whose icy righteousness does not deter her from a damaging intimacy with the ever-vigilant Jamal. (These entanglements aren’t particularly interesting, except for the brilliant portrayal of Miriam, an unstable culture vulture whose appetitive energies put even Jamal’s to shame.) Though it doesn’t actually go anywhere, the novel is filled with vivid particulars, mordant wit and odd little surprises—ranging from Jamal’s serendipitous arrival at an informal meeting with Mick Jagger following a Rolling Stones concert, to a brief allusion to prosperous gay London careerist Omar Ali (the protagonist, some of us will remember, of the brilliant film My Beautiful Laundrette, developed from Kureishi’s splendid original script). Things just seem to whirl around Jamal, a stubborn survivor who is perhaps foredoomed to sleepwalk through his days and waste his nights perpetually seeking a profession, family and culture to which he can belong.

The novel is by no means uninteresting, but it’s pretty much Kureishi as we already know him—again.