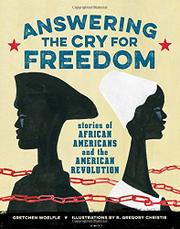 ANSWERING THE CRY FOR FREEDOM

Stories of African Americans and the American Revolution

Biographical sketches tell of 13 remarkable black men and women, including a double agent, a traveling female preacher, an admired poet, and a successful whaling captain.

While some may be known to readers, most will not. Information on John Kizell, for example, has only recently been uncovered. Many of their civic or military accomplishments are impressive, making it unclear why Sally Hemings is among the 13; although her story is notable, her primary contribution was ensuring the freedom of her children. Divided into four parts, the book moves from three men who fought in the Revolution to three slaves in Boston, three female slaves in the South, and, finally, four men and women who were born or became free and went on to advocate for others’ rights. Almost all overcame great odds to influence their world. Elizabeth Freeman sued for and won her freedom from slavery in 1781 Massachusetts. Prince Hall, a former slave, organized the first branch of black Freemasons, of which there are now 300,000 in lodges named after him. Richard Allen bought his freedom for $2,000, received the first copyright granted to an African-American, and founded the African Methodist Episcopal Church. The well-told stories, illustrated with striking silhouettes by Christie, can be read independently of one another. An open design, pull-quotes, and frequent headings add to the appeal.