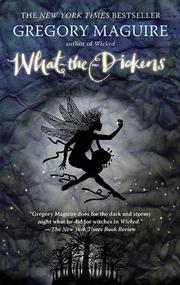 The Story of a Rogue Tooth Fairy

When a terrible storm (think Katrina) strands an inept young man with his highly sheltered cousins, he turns to storytelling to hold their fears at bay. What-the-Dickens is the protagonist of his story within the story; he is an orphaned skibberee (tooth fairy), and his search to belong is both poignant and humorous. From the start, What-the-Dickens attempts to find connections in a frightening world, and he repeatedly fails—such as his initial connection to a cat that would rather eat him—but he doesn’t stop. When he does find other skibberee, his independent thinking nearly brings down the entire skibberee hierarchy, and he must flee with his one ally. The quirky humor is threaded with darker themes of loneliness and loss. While more mature than Maguire’s Hamlet Chronicles, this bears the same hallmarks, including skillful use of language—precise, delightful turns of phrase and a conversational tone that perfectly enhances the subtext on the importance of storytelling. The endings for both the frame story and What-the-Dickens are happy, but not unalloyed. Overall, a winner for Maguire’s fans of all ages. (Fantasy. 8-12)