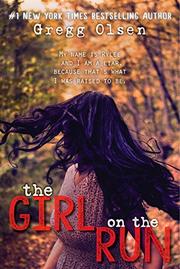 THE GIRL ON THE RUN

Ever since 15- (or maybe 16-) year-old Rylee (that’s her name this time around) can remember, she’s been on the run with her mother, stepfather, and younger brother, Hayden. They change towns, aliases, schools, and appearances every time her mother’s stalker catches up to them. When they find their mother missing and their stepfather murdered, Rylee and Hayden must flee on their own—and rescue her mother before the stalker carries out his final plan. Groomed by her years of lying, Rylee is well-equipped to go undercover, but she’s not prepared emotionally when she discovers the true identity of her mother’s stalker and his connection to murdered teen girls in the past. The tension in the taut, first-person narrative ratchets even higher when Rylee’s research uncovers not only that this villain is a serial killer, but that all of his victims only survived one week of his torture. She has only days to save her mother—and possibly even herself. And as she searches for clues about her mother’s disappearance, she uncovers her own life, too.

Without dropping a beat, the story ends in a crescendo of danger and turmoil and paves the way for the vigilante teen to take on more criminals in subsequent books.