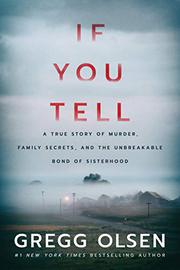 A True Story of Murder, Family Secrets, and the Unbreakable Bond of Sisterhood

A true story of three abused sisters who helped put their mother behind bars.

Nobody seemed to notice when a live-in babysitter vanished from the home of Dave and Shelly Knotek in tiny Raymond, Washington, in 1994. Then two more of the family’s boarders disappeared, and Shelly’s three daughters suspected the frightening truth: The couple had murdered the missing people. In his latest true-crime book, Olsen (Lying Next to Me, 2019, etc.) follows the half sisters, whose fears proved justified when—after the older two went to the police with the approval of the third—Shelly and Dave were arrested in 2003 and sent to prison for their roles in the deaths of babysitter Kathy Loreno and two others. It’s a grim tale, told in 85 short, James Patterson–esque chapters, leavened only by the sisters’ courage, strength, and love for one another. For years, Shelly inflicted sadistic abuses on her boarders and her daughters as Dave helped or stood by passively. Loreno was drugged, beaten, starved, and subjected to a crude form of waterboarding using a bucket and modified seesaw, and the Knoteks’ other victims endured similar cruelties. Olsen had access to the sisters, Dave Knotek, and a grandmother. Yet his overheated and repetitive prose robs the victims’ heart-rending stories of the high emotional impact they deserve. The three sisters are TV movie–ready tropes: Nikki, the strong-willed oldest; Sami, the accommodating middle child; and Tori, the baby who understood nothing until she understood everything. As for their mother, “Shelly was Cujo. Freddy Krueger. The freaky clown, Pennywise, from It.” For all its sordid details, the book never satisfactorily answers a question at its heart: In the sort of small town in which everyone tends to know everyone else’s business, how did the Knoteks’ horrific crimes go undetected for so long?

Murder, torture, and sisterly love milked for all their potential melodrama.