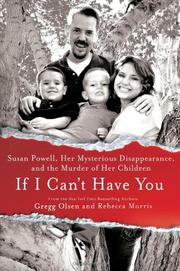 IF I CAN'T HAVE YOU

Susan Powell, Her Mysterious Disappearance, and the Murder of Her Children

The tale of an entire family succumbing to a tragic string of crimes.

When Susan Powell disappeared, many of her friends and family were quick to assume her husband, Josh, was at fault. Authors of the Bodies of Evidence series Olsen (A Twisted Faith: A Minister's Obsession and the Murder That Destroyed a Church, 2010, etc.) and Morris (Ted and Ann: The Mystery of a Missing Child and Her Neighbor Ted Bundy, 2011, etc.) convincingly lay out the myriad of circumstantial evidence against Josh. His suspicious actions the night his wife went missing, and in the weeks after, are damning, as is what seemed like a complete lack of concern with her fate. The authors set down these facts along with anecdotes from friends and family about an increasingly controlling husband and a wife who wanted out. Olsen and Morris clearly did their research, but they don’t add much color to their narrative. Those close to Susan seem to have been eager to contribute, while the Powell family was less forthcoming. Combined with the focus on Josh as the assumed guilty party, the narrative slides too easily into tired tropes of the beautiful young wife and mother pitted against an angry and oppressive husband. Though the respective shoes may fit, and the authors explain they don't intend for Susan to seem perfect, more nuance would have been welcome. Still, they paint a portrait of systematic dysfunction, and readers are left knowing exactly why Powell may have killed his wife. Many portions of the book are written as if the case was ultimately solved and culpability proved. When the case is closed—still unsolved—it leaves the entire story feeling anticlimactic and readers feeling cheated out of a sure thing.

Despite some truly chilling moments and much to learn, this engrossing case falls flat.