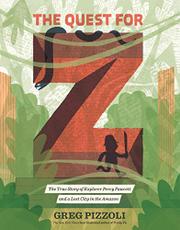 THE QUEST FOR Z

Pizzoli resurrects an early-20th-century mystery in this riveting portrait of Percy Fawcett, a renowned British explorer who vanished during an ill-fated hunt for a “lost” city.

Shortly following an early life of military service to the British Empire, Fawcett dived deep into a career of adventuring. He trained for a year with the Royal Geographical Society, a prominent research center based in London, before the organization began to send him out on expeditions into South America between the years of 1906 and 1924. Pizzoli devotes the first half of Fawcett’s tale to building the latter’s legend, expertly drawing from Fawcett’s thrilling brushes with wildlife and local populations to bring to life the formidable explorer. (An encounter involving a giant anaconda is presented via minimalist illustrations both terrifying and brilliant in scope.) Throughout his various research excursions, Fawcett heard tales of a mythical city deep in the Amazon rain forest. Naming the city “Z,” Fawcett soon embarked on what turned out to be his final known expedition, and his subsequent disappearance went on to capture the public’s imagination. As in the author’s previous gem (Tricky Vic, 2015), the strikingly matte, mixed-media pictures ooze personality and perfectly complement the succinct text and informational sidebars. Predictably, Fawcett’s story features a cast of light-skinned characters, with a few brown-skinned individuals included to represent the invisible local populations; his failure to “conquer” in the end represents a fascinating twist on the usual narrative of imperialism.

A superb snapshot of an adventurer.