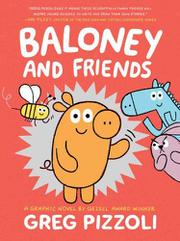 From the Baloney & Friends series, volume 1

A new chapter-book series promises tons of fun for everyone.

Baloney the pig couldn’t be happier about starring in his very own book—until pals Peanut D. Horse, Bizz E. Bee, and Krabbit (a crabby rabbit) crash the introduction, leaving him frustrated. Baloney perseveres and goes on to star in several, short comic book–style stories that often break the fourth wall and that always rely on the very different personalities of the characters to deliver humor. Peanut is a Pollyanna and just a bit daffy. Bizz is a sensible, thoughtful bee-ing. Krabbit is so crabby he’d give Oscar the Grouch a run for his money. Baloney? Well, Baloney is a sensitive sort who, in two longer episodes, wants to entertain his friends with a magic show and join in their fun at swimming. Shorter “mini-comics” between these sections provide good breaks for new readers who are, perhaps, just starting to make their ways through a longer text like this. Pizolli saves the strongest story for last, delivering a sweet and satisfying portrait of Peanut’s kindness to her friend Baloney when he feels blue. And readers needn’t feel blue themselves that the story is over since they can follow handy backmatter instructions to draw their own versions of the simple, line-drawn characters.

Here’s hoping there will be a bunch of Baloney in the future.