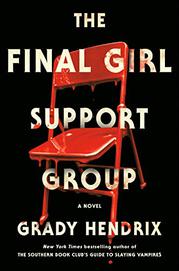 Serial killer survivors are forced to cooperate when they’re dragged screaming back into jeopardy.

You have to give it to Hendrix, author of The Southern Book Club’s Guide to Slaying Vampires (2020), for tapping into his deep knowledge of horror films and fiction to find a new angle on the tropes of terror with every outing. In the same way Edgar Cantero lampooned Scooby Doo in Meddling Kids (2017), this scary unraveling aims straight for the sheer terrors the best slasher films create. Here, Hendrix has zeroed in on the so-called “final girl,” the sole survivor of a horrific massacre—you’re already thinking of Jamie Lee Curtis in the Halloween movies or Sigourney Weaver in Alien. This book is even more skin-crawling, as deeply paranoid Lynnette Tarkington (impaled on an antler trophy during her first unfortunate encounter years ago) reluctantly participates in group therapy sessions with Dr. Carol Elliot along with fellow survivors Marilyn Torres, who has buried her emotions in wealth; Dani Shipman, who might have killed the wrong person; Julia Campbell, whose encounter left her in a wheelchair; and Heather DeLuca, who is succumbing to addiction. Hendrix can be tongue-in-cheek (see Horrorstör, 2014) but is deadly serious here while still warping the conventions of the genre, including the fact that some of the survivors have participated in graphic horror flicks depicting their very real traumas. The book is creepy enough on its face, but Hendrix’s use of expedient narrative tools, including a laconic cowboy lawman, an overly eager journalist, and a host of archetypal serial killers, heightens the unease. After one member of this vigilant sisterhood is murdered and a series of oddly prescient attacks threaten the rest, Lynnette becomes increasingly suspicious that the attacks are originating way too close to their inner circle. “Does this ever end?” Lynnette asks. “Will there always be someone out there turning little boys into monsters? Will we always be final girls? Will there always be monsters killing us? How do we stop the snake from eating its own tail?”

A bloody and grotesque but ultimately entertaining and inspiring take on horror movies, trauma, and self-determination.