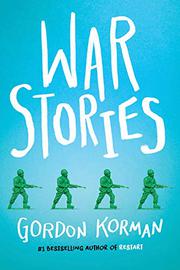 Two young people of different generations get profound lessons in the tragic, enduring legacy of war.

Raised on the thrilling yarns of his great-grandpa Jacob and obsessed with both World War II and first-person–shooter video games, Trevor is eager to join the 93-year-old vet when he is invited to revisit the French town his unit had helped to liberate. In alternating chapters, the overseas trip retraces the parallel journeys of two young people—Trevor, 12, and Jacob, in 1944, just five years older—with similarly idealized visions of what war is like as they travel both then and now from Fort Benning to Omaha Beach and then through Normandy. Jacob’s wartime experiences are an absorbing whirl of hard fighting, sudden death, and courageous acts spurred by necessity…but the modern trip turns suspenseful too, as mysterious stalkers leave unsettling tokens and a series of hostile online posts that hint that Jacob doesn’t have just German blood on his hands. Korman acknowledges the widely held view of World War II as a just war but makes his own sympathies plain by repeatedly pointing to the unavoidable price of conflict: “Wars may have winning sides, but everybody loses.” Readers anticipating a heavy-handed moral will appreciate that Trevor arrives at a refreshingly realistic appreciation of video games’ pleasures and limitations. As his dad puts it: “War makes a better video game….But if you’re looking for a way to live, I’ll take peace every time.”

This weave of perceptive, well-told tales wears its agenda with unusual grace.