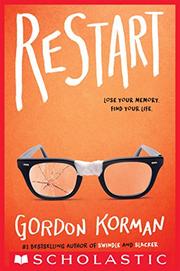 Will a bully always be a bully?

That’s the question eighth-grade football captain Chase Ambrose has to answer for himself after a fall from his roof leaves him with no memory of who and what he was. When he returns to Hiawassee Middle School, everything and everyone is new. The football players can hardly wait for him to come back to lead the team. Two, Bear Bratsky and Aaron Hakimian, seem to be special friends, but he’s not sure what they share. Other classmates seem fearful; he doesn’t know why. Temporarily barred from football because of his concussion, he finds a new home in the video club and, over time, develops a new reputation. He shoots videos with former bullying target Brendan Espinoza and even with Shoshanna Weber, who’d hated him passionately for persecuting her twin brother, Joel. Chase voluntarily continues visiting the nursing home where he’d been ordered to do community service before his fall, making a special friend of a decorated Korean War veteran. As his memories slowly return and he begins to piece together his former life, he’s appalled. His crimes were worse than bullying. Will he become that kind of person again? Set in the present day and told in the alternating voices of Chase and several classmates, this finding-your-middle-school-identity story explores provocative territory. Aside from naming conventions, the book subscribes to the white default.