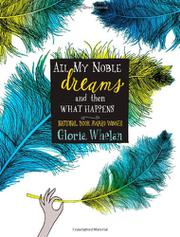 ALL MY NOBLE DREAMS AND THEN WHAT HAPPENS

In this sequel to Small Acts of Amazing Courage (2011), heroine Rosalind dances with the Prince of Wales during his 1921 visit to India and does her bit for Gandhi’s independence movement.

Growing up in colonial India, Rosalind isn’t “what a well-bred English girl should be,” to the distress of her very British father. Two years before, Rosalind and her friend Max barely avoided arrest for publically supporting Gandhi’s movement to free India. Now they sympathize with his nonviolent strikes disrupting the country. When Rosalind’s father is invited to festivities surrounding the Prince of Wales’ visit to Calcutta, Max coaxes her to deliver an important letter from Gandhi to the prince. Months later, in London, Rosalind’s chance encounter with King George V also affects Gandhi’s cause. Whether saving an Indian girl from an arranged marriage or teaching Indian boys, Rosalind’s loyalties lie with her adopted country. Though at first approaching India’s struggle from a “White Man’s Burden” perspective, Rosalind learns not to apply English values to India and its cultures. Whelan conveys the atmosphere of a critical period in India’s history from the sympathetic, first-person perspective of an egalitarian heroine who acts on her principles.

An entertaining, if fanciful look at colonial India in transition.