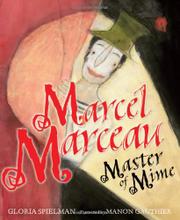 The legendary mime is introduced to a new generation, though not entirely successfully.

As a child, Marceau loved to silently entertain his friends, like his idol, Charlie Chaplin. During the Nazi occupation of France, Marcel and his brother took on new identities in the French Underground, where they forged documents for Jewish children and helped many to escape to Switzerland. Spielman assumes that her young audience will understand references to deportation and concentration camps; unfortunately for those that don't, her matter-of-fact tone speaks more of adventure than deadly peril. Her tone subtly changes when she lovingly describes Marceau’s training and development as a mime and his stage persona of Bip the clown, admiring his skills in the “art of silence” that won him international renown. But here too, comparisons to the Little Tramp and Pierrot may be outside readers’ frame of reference. Though the illustrations carefully complement the textual content with period details, Gauthier’s cartoon faces are all nearly identical, with only the screen image of Chaplin and Marceau’s Bip having distinctive features. A double-page spread at the conclusion provides photographs of Bip in action and is the only clear indication of Marceau’s stagecraft.

At its best when the emphasis is on the skill and artistry of Mime’s most accomplished practitioner—alas, too much of the book looks elsewhere. (Picture book/biography. 8-10)