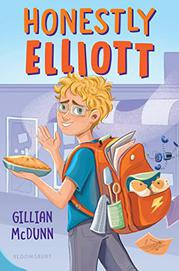 A sixth grader’s ADHD exacerbates the loss of his best friend, stress of entering a new school, fear of disappointing his father, and anxiety over a new sibling.

“Always-late, homework-forgetting, not-many-friends, extra-disorganized” Elliott lives with his positive, supportive mother in their comfortable, welcoming home but spends weekends with his focused, organized father and stepmother in their perfectly redecorated house. Since the recent departure of his best friend, Elliott’s ADHD has caused him to nearly fail the first semester of middle school, overreact to his stepmother’s pregnancy, upset his father with “The Incident,” and start seeing a therapist. Elliott, however, loves cooking, an activity during which he’s focused, confident, decisive, and calm. Rejected by the kids he eats lunch with when it’s time to work together on a group project to develop and implement a business plan, Elliott unexpectedly ends up paired with Maribel, the smartest girl in class. When Maribel reveals she has celiac disease and Elliott explains his ADHD, they develop a delicious, gluten-free pie recipe—and their friendship blooms. Over time, Elliott applies his culinary skills, opens up about his fears, bonds with his stepmother, and connects with his father. In a droll, engaging, self-effacing, and disarmingly open voice, Elliott narrates his story, providing realistic, firsthand insights into living with ADHD. Elliott and his family read as White; Maribel is cued as Latinx, and names signal ethnic diversity in the supporting cast.

A refreshingly honest exploration of family and friendship.