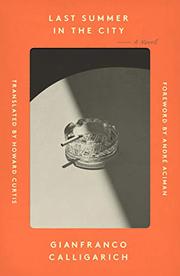 LAST SUMMER IN THE CITY

When nothing means anything, what do you grab onto to save yourself?

Drifting aimlessly in a sea of alcohol, coffee, women, and cigarettes, Milanese transplant Leo Gazzara floats through life in Rome, buoyed by his collection of secondhand classic books and a loose network of friends (some similarly disaffected, some seeming to have goals or, at least, cash). Leo’s attempts to create a more structured life—usually involving less alcohol and more employment—occur in waves and begin to take on more urgency when he encounters the troubled but alluring Arianna at a party at the home of more successful (and more settled) friends. Leo and a coasting soul mate, Graziano, mull over the causes of their estrangement from routine life and attempt a concerted effort to rescue themselves from slipping away entirely into adolce vita punctuated by drives to the sea or revivifying showers. Leo’s own efforts to recognize and connect with a meaningful existence rely in no small part on what may be the enduring love of his life: books. Allusions to Proust, James Fenimore Cooper, and other masters echo throughout Calligarich’s short but dense novel. Andre Aciman’s epic foreword to this first American edition provides biographical and bibliographic context for Calligarich’s novel, which was widely rejected before finally being published to acclaim in Italy in 1973 and, though falling in and out of print, developed a cultlike following over the years. The account of a lost generation in Rome in the early 1970s (possibly the children of the children of Hemingway’s lost generation) carries the weight of both family history and generational saga.

A portrait of a young man adrift in a world where meaning has been swept away.