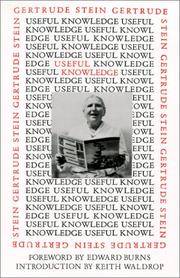 Out of print for more than 60 years, this is Stein's paean to America, a compendium of prose pieces and poems—most of which were unpublished when the American expatriate collected them for book publication in the early 1920's. Among the subjects Stein covers here are Woodrow Wilson, Chicago, Sherwood Anderson, Baltimore, and the difference between the South and the North, all written about in the classic Stein manner—so many readers will no doubt be grateful for the illuminating foreword by Edward Burns, literary executor of the Alice B. Toklas estate, and the introduction by Keith Waldrop, executive director of Brown U.'s graduate writing program. At once, and often, polished and impenetrable, this is prime Stein—e.g., on the "The Difference Between the Inhabitants of France and the Inhabitants of the United States of America": ". . .To guess which is which. Which is which. Guess. Two guess. Which is which. . ."