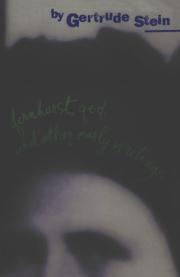 FERNHURST, Q.E.D. AND OTHER EARLY WRITINGS

For one whose life and reputation depended so heavily on magnificent friendships, Gertrude Stein has remained an oddly remote figure — formidable to her contemporaries and largely dismissed by later generations. This volume of early writings does much to bridge the distance she herself, by style and sheer adamance of outlook, helped to enforce, and invites a kind of sympathy she would never again permit. All three (with the titles cited, there is a first draft of the opening chapters of The Making of Americans) were composed circa 1903, when she was-beginning her hesitant drift from Johns Hopkins toward the rue de Fleurus — but most importantly, when she was caught up in a powerfully disorienting and agonized lesbian triangle. In psychological terms, her problem was one of validation — how to interpret behavior which had no conventional context — and these relentlessly anatomizing, "geometrizing" stories were a means toward, not catharsis, but clear understanding. A grueling business it must have been, especially in "Q. E. D.," which literally recreates the affair in all its emotional nuances from letters and remembered conversations. But all are parallels to some extent; all reflect her moral and psychological preoccupations, her curiosity, and her pain. After reading them one is better able to appreciate her reflexive endorsement of the bourgeois, her insistence on "things as they are" (however incomprehensible that vision might be to others), and, most especially, her own dignity and depth of feeling. Leon Katz's Introduction supplies the background with befitting tact, and a marginally related essay by Donald Gallup traces The Making of Americans from manuscript into print. Of special bibliographic interest too, since none of these has been printed before in its original form.