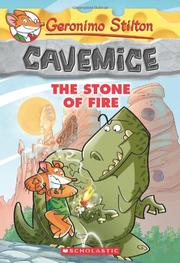 THE STONE OF FIRE

From the Cavemice series, volume 1

Readers will find Geronimo Stiltonoot a familiar character, outfitted differently from descendant Stilton yet still running a newspaper and having wild adventures. In this introduction to prehistoric mouse life, someone has stolen the most powerful and important artifact housed by the Old Mouse City Mouseum: the Stone of Fire. It’s up to Stiltonoot and his fellow sleuth and friend, Hercule Poirat, to uncover not only the theft, but a dangerous plot that jeopardizes all of Old Mouse City. As stand-ins for the rest of the Stilton cast, Stiltonoot has in common with Stilton a cousin named Trap, a sister named Thea and a nephew named Benjamin. The slapstick comedy and design, busy with type changes and color, will be familiar for Stilton readers. The world is fictionalized for comedic effect, featuring funny uses for dinosaurs and cheeky references to how far back in time they are, with only the occasional sidebar that presents facts. The story takes a bit long to get started, spending a lot of time reiterating the worldbuilding information laid out before the first chapter. But once it does start, it is an adventure Stilton readers will enjoy. Geronimo Stiltonoot has the right combination of familiarity and newness to satisfy Stilton fans. (Fiction. 6-10)