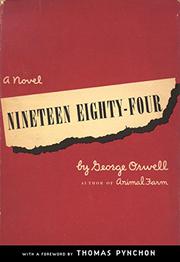 The Book-of-the-Month Club dual selection, with John Gunther's Behind the Curtain (1949), for July, this projects life under perfected state controls.

It presages with no uncertainty the horrors and sterility, the policing of every thought, action and word, the extinction of truth and history, the condensation of speech and writing, the utter subjection of every member of the Party. The story concerns itself with Winston, a worker in the Records Department, who is tormented by tenuous memories, who is unable to identify himself wholly with Big Brother and The Party. It follows his love for Julia, who also outwardly conforms, inwardly rebels, his hopefulness in joining the Brotherhood, a secret organization reported to be sabotaging The Party, his faith in O'Brien, as a fellow disbeliever, his trust in the proles (the cockney element not under the organization) as the basis for an overall uprising. But The Party is omniscient, and it is O'Brien who puts him through the torture to cleanse him of all traitorous opinions, a terrible, terrifying torture whose climax, keyed to Winston's most secret nightmare, forces him to betray even Julia. He emerges, broken, beaten, a drivelling member of The Party. Composed, logically derived, this grim forecasting blueprints the means and methods of mass control, the techniques of maintaining power, the fundamentals of political duplicity, and offers as arousing a picture as the author's previous Animal Farm.